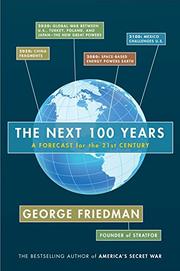 A Forecast for the Twenty-first Century

Prophecy, whether by astrologers, science-fiction writers or geopoliticians, has a dismal track record, but readers will enjoy this steady stream of clever historical analogies, economic analyses and startling demographic data. He dismisses America’s obsession with the war on terrorism. Al-Qaeda, he explains, aims to recreate a united, Ottoman-like Islamic empire. To thwart this, the United States has merely to sustain the present disunity of Muslim nations. Win or lose, when we withdraw from Iraq and Afghanistan over the next decade, the region will remain satisfyingly chaotic, and America can turn its attention elsewhere. There will be plenty to occupy us. Our leading economic rival, China, will implode, its dazzling growth ending in a crash just as Japan’s did in the 1990s. But while Japan’s stable society has endured during nearly 20 years of economic depression, China’s rigid leadership and fractious regionalism cannot tolerate such stress, and the nation will fragment. A reviving Russia will try to reestablish defensible borders in Eastern Europe and the Caucasus, but shrinking population and reliance on natural resources for wealth doom it to failure and collapse. Japan, Turkey and Poland will fill the vacuum. For these predictions, Friedman relies heavily on a trend that will jolt most readers. The population explosion is ending, he writes; after 2050 advanced nations will need massive immigration to fill jobs and support their aging citizenry. This will provide another boost for America, which has always been friendlier to immigrants than Europe or Japan. Also, Mexico will become a great power.

Few readers will buy all the prognostications, but most will agree that the author makes a reasonable case, backed with vast knowledge of geopolitics delivered in accessible prose.