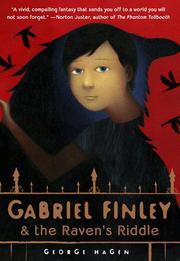 GABRIEL FINLEY AND THE RAVEN'S RIDDLE

From the Gabriel Finley series, volume 1

Aunt Jaz has always evaded Gabriel’s questions about his father’s disappearance and won’t discuss Uncle Corax (whose unpleasant, bird-of-prey visage hangs among the family portraits in their Brooklyn mansion); then shortly before Gabriel’s 12th birthday, she gives him his father’s childhood notebook, which reveals the magical bond between humans and ravens.

Simultaneously, Paladin, a raven chick being raised by his mother nearby, learns that Gabriel’s family, like his own, possesses the rare ability to communicate across species and that when a human and raven form a close amicus bond, the two can join together in one body, human or raven. Paladin’s mother explains how riddles—funny ones, especially—which ravens love, protect them from their ancient enemies, valravens, avian ghouls whose inability to appreciate riddles gives them away. The first valraven, Huginn, born a raven like his brother, Muninn, sought immortality from a cursed, magical torc that promised him eternal life if he consumed the flesh of his dead amicus. Now Valravens seek the torc again while Gabriel and Paladin—supported and hindered by a cast of quirky characters, male and female, human and avian—vow to stop them and rescue Gabriel’s father from the underground city of Aviopolis.

Hagen’s first children’s book, flavored with Norse mythology, is brimful of antic energy and inventive flair, like the best middle-grade fantasies; readers, like baby birds, will devour it and clamor for future installments.