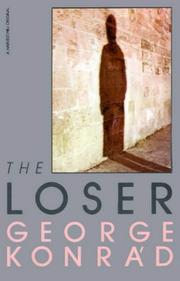 From the depths of a mental hospital--and anyone familiar with Konrad's novels of degradation knows how wretched his fictional depths can be!--an unnamed narrator recalls his life as an intellectual, a social scientist, a Jew, an Army officer, a revolutionary henchman, a state minister during Hungary's tragic 1956 spasm. . . and an ideological murderer. Now, however, the narrator is safe among the crazy: ""It's us madmen against you idiots."" So the novel, large and serrated rather than well-knit-together, roams back and forth between the asylum and memory. The narrator recalls his roving father, his delicate yet dictatorial mother, his lively, saint-like Hassidic grandfather, his shrewd grandmother. He remembers his younger brother Dani--whose life of marital torment eventually led him to kill his insane, promiscuous wife. And brother Dani's world of domestic madness serves as a counterpoint to the narrator's own life of public madness: he is tortured by the Nazis, by the partisans, by the revolutionary forces, by the very same governmental police he worked to install; he himself is sometimes a torturer, even a killer; but, worst of all, he carries on through it all with something like equanimity--and there's a long section on the traduction of intellectuals, the treason of the clerks, that positively reeks with self-disgust. This, then, is a tremendously ugly book--as well as a novelistically insecure one, with pieces that never really fit. But, hideously enlivened by the vividness of foul incident, Konrad's pessimism lights like the neon in a tube here--and the sheer textures of personal distaste make his roughest work yet grimly memorable.