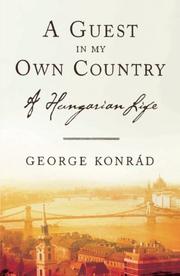 A GUEST IN MY OWN COUNTRY

A notable European intellectual’s path from persecution, exile and privation to the status of spokesman for his embattled country’s resiliency.

Born in 1933, Konrád grew up among a well-to-do middle-class Jewish family supported by his father’s hardware store, until the Nazis’ approach persuaded the Hungarian government to capitulate. “The town had deported its Jewish citizens,” Konrád recalls more than 60 years later, “and viewed all their possessions as its own, moving strangers into their houses.” The episodic story of young George’s survival (with his sister and two male cousins) after the “removal” of their parents from their village (Berettyóújfalu) is an odyssey of hasty travel, crowded and imperiled experiences at home and abroad shared with those who sheltered them, and—following “Liberation” in 1945—return to Hungary (in a cattle car) to a nearly destroyed home and a future whose bleakness was mitigated by their parents’ safe return from an Austrian internment camp. The book’s latter half depicts Konrád’s salvation through formal education; jobs as social worker, magazine editor and teacher; the publication of his brilliant first novel (The Case Worker, 1969) and the polarizing sociopolitical study (The Intellectuals on the Road to Class Power, 1979) he co-authored; and the hard-won acquisition of survival skills required of Hungary’s Jews, doubly victimized by the Third Reich and by the violent class struggle of the 1956 Hungarian Revolution. Konrád’s novelistic skills (also displayed in such fiction as The City Builder, 1977, and Stonedial, 2000) produce vivid, terse sketches of numerous relatives and acquaintances, and the book features dozens of heart-stopping perceptions (e.g., the realization that his aged mother’s “forgetfulness may help her. . . . She is letting go of her burdens”). But the book is flawed by confusing past-present shifts, and an imbalance that is presumably the result of its “slightly edited” second half.

Still, a valuable and absorbing chronicle of a terrible ordeal and of the transcendent courage shown by both its survivors and its victims.