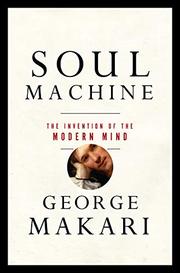 The Invention of the Modern Mind

Throughout Western history, the nature of humans’ inner lives has vexed philosophers, physicians, scientists, and theologians. Makari (Psychiatry/Weill Cornell Medical Coll.; Revolution in Mind: The Creation of Psychoanalysis, 2008) offers a thorough examination of debates about soul, spirit, and what we now call “mind.”

The author primarily focuses on 17th- through mid-19th-century British and European thinkers. Is mind, he asks, “a necessary theory, a physical thing, a language game, or a deep-seated prejudice?” Language itself has caused myriad problems. The French, for example, were at a loss to translate John Locke’s choice of words—and invention of neologisms—to represent inner life: “consciousness” and “self-consciousness” were not rendered clearly by terms such as la conscience (implying ethical awareness) and esprit, which signified spirit or soul. Besides Locke, Makari examines major theorists such as Newton, Descartes, Diderot, Voltaire, Hobbes, Bacon, Hegel, and Schelling. While these names may be familiar to readers with a background in intellectual history or philosophy, less familiar figures from Makari’s large cast of characters unfortunately emerge less as fully delineated personalities than as purveyors of abstract ideas. The author creates a lively narrative about Franz Anton Mesmer, the eccentric, egotistical perpetrator of animal magnetism, who captivated many in pre-revolutionary Paris and repelled others who feared that he conceived men as “magnetic machines with no will and therefore no capacity for self-governance or self-knowledge.” Political and social change, the author argues, were intrinsically connected to the acceptance or rejection of various thinkers. “When the French Revolution drove out the Church and the protectors of the soul,” he writes, “a fully formed secular, modern lineage of the mind was waiting, ready to emerge.” Despite advances in neurophysiology and research into mental illness, Makari maintains that we still think of dualities when it comes to mind (“the mind-body problem, the Nature/Nurture problem, free will versus determinism”), a view that many readers will share.

An erudite book that reveals how and why the understanding of consciousness still eludes us.