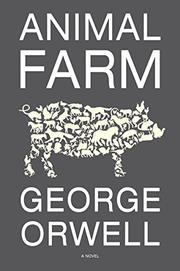 A modern day fable, with modern implications in a deceiving simplicity, by the author of Dickens. Dali and Others (Reynal & Hitchcock, p. 138), whose critical brilliance is well adapted to this type of satire. This tells of the revolt on a farm, against humans, when the pigs take over the intellectual superiority, training the horses, cows, sheep, etc., into acknowledging their greatness. The first hints come with the reading out of a pig who instigated the building of a windmill, so that the electric power would be theirs, the idea taken over by Napoleon who becomes topman with no maybes about it. Napoleon trains the young puppies to be his guards, dickers with humans, gradually instigates a reign of terror, and breaks the final commandment against any animal walking on two legs. The old faithful followers find themselves no better off for food and work than they were when man ruled them, learn their final disgrace when they see Napoleon and Squealer carousing with their enemies... A basic statement of the evils of dictatorship in that it not only corrupts the leaders, but deadens the intelligence and awareness of those led so that tyranny is inevitable. Mr. Orwell's animals exist in their own right, with a narrative as individual as it is apt in political parody.