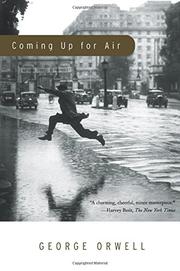 COMING UP FOR AIR

A very different dish of tea from his earlier Animal Farm and recent Nineteen Eighty Four both of which instigated aroused controversy, is this book which was published in England before the war. Prophetic in its atmosphere, it is the total recall of George Bowling, 45, which is started by his set of new false teeth and some money he has won on the horses. The morning's events help him envision what will come with Hitler's threats growing stronger, lead him to think of his youth with special intensity and review the sort of secure, continuous life that went with World War I which took him out of the grocery business, turned him loose among books, inspired his thinking. The mental squalor of his life thereafter with Hilda and their two children and his present doubts as to what is coming — and the 17 quid — send him on a secret visit to his old home. It in turn offers only failure as an antidote for the country has turned into town, no one knows or remembers him or his family — everything is disillusion. In London again with the knowledge earned that there is no going back, that what is to come — horrible as it must be — cannot be stopped. Honesty in the picture of a man neither highbrow nor a fool of a poky milleu and the mingy situations of living, of the downhill path to a ghastly flux, this in its backward, introspective look offers a nostalgic, sincere appreciation of a way of life that can never be again, and will prove something new for his followers.