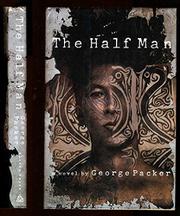 Young American journalist loses his humanistic illusions in a small, revolution-torn Third World country situated off the coast of Asia. Packer, whose The Village of Waiting (1988) told of his experience as a Peace Corps volunteer in Togo, West Africa, shifts not only eastward but into fictional territory staked out by Joseph Conrad and Graham Greene: White Westerner confronted by an alien have-not world that he only half understands. Daniel Levin, reared in suburban Philadelphia, accepts an assignment to the island nation of Direv Sauran to find out the truth about its civil war and to test his mettle. His restiveness on the island is emphasized by an unsatisfactory visit from his stateside fiancÇe, who can't understand his obsession with the country. He leaves her in the capital city for an exclusive interview with the revolutionary leader, Fra Boboy, in his mountain fastness among a people whose name for a white is ``Ngot'' (Half Man), their forest bogeyman. Boboy's view is that the East/West ideological struggle is dead ``and history is born in bastard lands.'' Levin is accompanied on the trip by Ding, an educated, once well-to-do Sauranan photographer split between his native culture and Western trappings. Packer's descriptions of the country—its sights, sounds, and smells—are remarkably vivid, and the trip to the revolutionary redoubt is high adventure. But the major flaw in this otherwise gripping novel is the amount of space given to long ideological/philosophical debates, which have a stagy air and often descend into obscurity. Fra Boboy, whose doctoral dissertation was on Sacrifice, Impurity, State: Structures of Self and Violence in Modern Primitive Society, doesn't ring true as a man of action. And Levin's self-probing lacks real weight. Striking depiction of an impoverished Asian country caught up in a post-cold war revolutionary struggle—but excessive philosophizing chips away at credibility and readability.