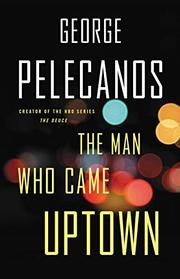 THE MAN WHO CAME UPTOWN

Pelecanos (The Martini Shot, 2015, etc.) follows the trails of three nominally free agents drawn together by the matrix of the D.C. jail.

Michael Hudson has been arrested and is awaiting trial for robbery. Phil Ornazian is an investigator who works for Matthew Mirapaul, his old friend and Michael’s lawyer. Anna Kaplan Byrne is the prison librarian who supplies Michael with the novels that make him feel, for as long as he’s reading, that “he was not locked up. He was free.” The prison setting makes it clear who the good guys and the bad guys are. Then Ornazian gets Michael freed by encouraging the man who accused him not to testify, and it’s not so clear anymore. Michael, supported by Doretha Hudson, the mother who speaks plainly of both her disappointment and her hope in him, seems to be making ends meet working as a dishwasher in the District Line, a local restaurant. Ornazian, who runs an occasional sideline with bail bondsman Thaddeus Ward to rob local pimps, gets a lead on a ripe new target named Gustav at the same time he’s working a case of vandalism, robbery, and assault for a client of Mirapaul’s who hasn’t wanted to expose to the authorities his daughter’s folly in advertising on Facebook the party that was crashed by the vandals. Anna finds herself running into Michael at the District Line and, more disquietingly, outside her home. She very much wants Michael to go straight. He wants to go straight himself. But Ornazian wants him to drive the getaway car for his latest hijacking, and then the one after that. How can he possibly stay clean?

Using his customary knowing dialogue and stripped-down, soulful prose, Pelecanos skillfully, sensitively works the urban frontier where the problems and stresses of everyday life cross the line into the sort of criminal behavior that could tempt anyone—anyone at all.