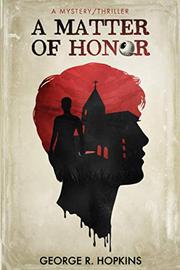 A MATTER OF HONOR

In Hopkins’ (The Staten Island Butcher, 2018, etc.) latest mystery series installment, private investigator Tom Cavanaugh tries to clear his brother’s name of a murder that may have been committed by a serial killer.

Father Jack Bennis, a Jesuit priest, stumbles upon a dead man in his New York City church. The man has a wooden skewer sunk into his neck, and his eyes have been gouged out and placed into one of his pockets. Attached to the skewer is an index card, scrawled with the number 2. Jack quickly calls his brother, Tom—a former homicide detective and combat soldier who’s now a hard-boiled private investigator—for help. Just before discovering the corpse, Jack learned that a 12-year-old Colombian orphan named Chico, whom the priest had helped years ago, has just escaped from his orphanage in Cartagena. Jack quickly departs for South America in search of the boy, inevitably making him a chief suspect in the recent murder. Meanwhile, Tom conducts an investigation of his own in an attempt to exonerate Jack, and he discovers evidence that a serial killer is on the loose—and that the murder may also be tied to the Italian-American mob. In this eighth series entry, Hopkins packs the brisk plot with drama and sudden paroxysms of violence. However, the story gets rather convoluted as Jack confronts gangsters trafficking drugs and child sex slaves as he tries to rescue not only Chico, but also his own former flame, María Isabelle, from danger. The author does skillfully depict the moral squalor of the criminal underworlds in New York and Cartagena. However, his prose style is consistently melodramatic and occasionally overwrought, as when a reporter lambastes Tom when he reneges on a deal: “You know you’re a creep, Cavanaugh! You’re holding out on me. We had a deal! You’re a conniving fraud. You’re nothing more than a dirty weasel and a liar. I hate your guts!” And although the reader needn’t have read the previous books in the series to understand this one, there are so many connections to them that it would be helpful to do so.