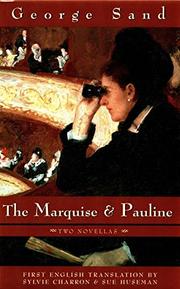 THE MARQUISE and PAULINE

Two novellas by the celebrated 19th-century French novelist, translated into English for the first time. The novel of manners has come far since the18th century’so far, actually, that by today it has pretty well wandered off the horizon. A growing number of feminists and cultural historians, however, are reexamining the romances and —penny dreadfuls—of earlier periods for insights into the conditions of life for women during these eras, and it will be largely among such readers that these novellas (hardly Sand’s best) will find their audience. The Marquise offers an elderly French aristocrat’s recollections of the one grand passion of her life: an infatuation she developed for Lelio, an Italian actor at the ComÇdie Francaise. Reversing the usual gender roles (the rich pursuer is a woman, the naive victim male) gives the story a twist, but not enough to make up for the stale plot and hackneyed prose (— —Take pity on me,— he said, —kill me, drive me away— —).On the other hand, Pauline is a more conventional woman-wronged tale. Here, an innocent country girl, emboldened by her childhood friend’s success on the Parisian stage, moves to the city in search of fame and fortune—only to be toyed with by a philandering boulevardier who impregnates her while carrying on with her best friend. Although not without touches of wit (—Thus this trite tale ended in marriage, and that was Pauline’s greatest misfortune—), the entire narrative resembles a crude outline of Madame Bovary written for children. For the archives only. Sand is an important enough figure to merit posthumous publication and translation, but little here will interest anyone not already very interested in her.