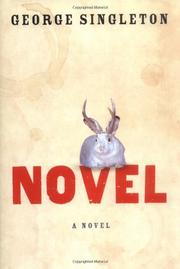 Just down the road a piece from the literary territories of James Wilcox and T. R. Pearson is the town of Gruel, where the story begins with a literal bang. Novel Akers’s mother-in-law, Ina Cathcart, perishes along with her common-sense–challenged son Irby, whose lit cigarette encounters her oxygen tube as he’s driving Mom home from the hospital. Then, things get strange. Novel (so named by his ex-concert-pianist parents, because it seemed to fit with those of his older adopted Irish orphan siblings James and Joyce), having lost his job as an itinerant advocate for snakes’ rights (and ecological usefulness)—which is actually a cover for the subversive speeches Novel penned for a clueless lieutenant governor—decides to hunker down and write his autobiography (to be titled, of course, Novel). His wife (Re)Bekah, unhinged by either the above-mentioned fatal accident or her own possible complicity in her daddy’s putative suicide, skips town, leaving Novel to re-renovate the venerable Gruel Inn (which Bekah had turned briefly into the Sneeze ’n’ Tone weight-loss spa) as a writers’ retreat. Novel hangs with philosophical bartender Jeff the Owner, deflects the wandering attention of surplus storeowner (and, probably, Bekah’s hired contract killer) Victor Dees, and half-heartedly romances recently slimmed-down Maura Lee Snipes (whose emporium features her specialty “Jesus Crust”), before being hired as Gruel’s town historian. So it goes, interspersed with Novel’s memories of his siblings’ sociopathic merriment and his eccentric father’s nuggets of useless wisdom (“A great pianist should keep a rabbit with him at all times . . . to keep his hands warm”). There’s a novel somewhere inside Novel, but it’s buried under the gags, many of which are just about irresistible.

Singleton (stories: The Half-Mammals of Dixie, 2002, etc.) may have invented a new genre. Call it The Hoot.