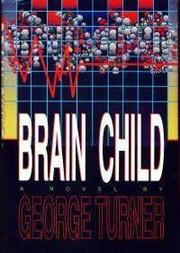 Another fascinatingly plausible exploration of a near-future scenario (Drowning Towers, 1988), this time involving genetic manipulation to bring about enhanced intelligence. Young journalist David Chance, who had thought himself an orphan, receives a message from his real father, Arthur Hazard, urging David to join him in exploring the unpublicized and unplumbed aspects of the intelligence-enhancing project that produced Arthur and others but eventually ended in disaster. Three groups of children were created; the first (Arthur's group) became technological whizzes; the second, gifted artists; the third developed intelligence so exceptional as to be incomprehensible, even to the other two groups, and eventually killed themselves. The third group's leader, Conrad, left a mysterious ``legacy'' that previous investigations have failed to discover. Where, and what, might this legacy be? First, Arthur sends David to tackle Armstrong, the still powerful and dangerous politician who originated the project. Soon, government security agents take note of David's activities. The legacy, it emerges, is a technique for achieving immortality. But who could be trusted with such a secret? Realistic, disturbing, thoughtful, and provocative: Layer upon layer of revelation unpeeled with patient, limpid skill.