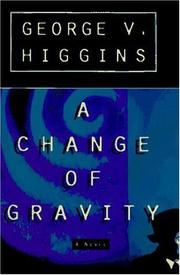 A CHANGE OF GRAVITY

A retrospective look, courtesy of a million patented Higgins conversations, at 40 years of corrupt Massachusetts politics. The day of judgment has come for Daniel Hilliard. Even though a flamboyant series of marital infidelities drove him out of the state senate in 1984—he's been cooling his heels ever since as president of Hampton Pond Community College—prosecutors think they've found a way to nail him for the gentlemanly bribes and kickbacks he made a way of life for 25 years. Unlikable Arnie Bissell plans to give Hilliard's right-hand man, district court clerk Ambrose Merrion, immunity so he'll have to testify about the Fourman Realty Trust, a sweetheart deal Merrion inherited a share of from his predecessor, Larry Lane, a virtuoso wheeler- dealer whose little economies with public money have grown enough (inflation and compound interest having worked their miracles) for Merrion to keep Hilliard in the toney, and actionably expensive, Grey Hills Country Club long past his retirement from the senate—and past the date when the statute of limitations has run out on his other alleged defalcations. Will Merrion be forced to drag years of good-natured mischief into the open by rolling over on his best friend? Higgins stretches this short-story idea to the length of a Victorian monstrosity by the simple expedient of reporting exhaustively on every person who's ever swum in Hilliard's waters. Subsidiary characters—e.g., the family of Julian Sanderson, the golf pro who urges Hilliard through the mysteries of Grey Hills—sprout as alarmingly as kudzu, till even Merrion wonders about Julian: ``Why is he on this planet? What the hell is he for?'' With the sociological grasp of Trollope and Thackeray, but with a distinctly postmodern sense of architecture—he circles around subplots long after you've forgotten why they ever came up—Higgins (Sandra Nichols Found Dead, 1996, etc.) has produced his most ambitious, and infuriating, book in years.