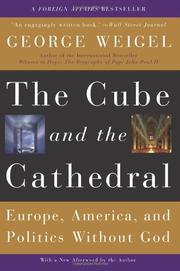 THE CUBE AND THE CATHEDRAL

Europe, America, and Politics Without God

Can the EU make the world safe for democracy? Not if it continues to deny its Christian roots, says Weigel (The Truth of Catholicism, 2001, etc.).

Weigel’s pithy polemic boldly assesses contemporary Europe. In his view, it’s in peril. Its traditional populations are shrinking, and millions of Muslims are immigrating to western Europe; within 30 or so years, the majority of teenagers in the Netherlands will be Muslim. The EU is bent on pedaling “soft power” instead of military might, diplomacy instead of coercion—all well and good if it works, but hawkish Weigel suspects that it won’t. What is the essence of the problem? It can been seen in the new EU constitution, which claims that European civilization grew from the soil of ancient Greece and the Enlightenment, making no mention of Christianity. Indeed, during the 2004 debate over the constitution, when lobbyists (including the pope) urged the EU to acknowledge Europe’s Christian heritage, a Swedish member of the constitutional convention thought these lobbyists were joking, and many other commentators worried that mention of Christianity’s role in shaping European mores might “exclude” non-Christians. (On that argument, Weigel wryly notes that the mention of the Enlightenment “excludes” postmodernists.) The author argues that this thin secularism, an agreement among Europeans to be officially neutral on matters of worldview, religion, and morality, will fail the very things the EU claims it wants to safeguard and promote: democracy and human freedom. It’s quite a provocative stance, but Weigel sprinkles his own conservative Catholicism so readily throughout the text that readers who might have been persuaded by the contours of his argument may well dismiss him as a right-wing nut. For example, admitting that America too has problems, he confines his list thereof to abortion, gay marriage, political correctness at universities, “courts usurping the prerogatives of legislatures,” and the like. No mention of, say, environmental degradation or unchecked consumerism.

Sure to be much discussed—and possibly to be remarkably influential.