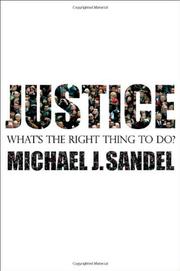 A Harvard law professor explores the meaning of justice and invites readers on a journey of moral and political reflection, “to figure out what they think, and why.”

Does a veteran suffering from post-traumatic stress disorder “deserve” the Purple Heart? Should the U.S. government formally apologize and make reparations for slavery? Is it wrong to lie to a murderer? Following the taxpayer bailout of the company, are executives at insurance giant A.I.G. still entitled to their bonuses? Should a professional golfer afflicted with a severe circulatory condition be allowed to use a golf cart during tournaments? Are you obliged to surrender your criminal brother to the FBI? Although Sandel (The Case Against Perfection: Ethics in the Age of Genetic Engineering, 2007, etc.) concedes that answering the many questions he poses, bound up “with competing notions of honor and virtue, pride and recognition,” is never easy and inevitably contentious, it’s necessary for a healthy democracy. “Justice,” he writes, “is inescapably judgmental.” Using three approaches to justice—maximizing welfare, respecting freedom and promoting virtue—the author asks readers to ponder the meaning of the good life, the purpose of politics, how laws should be constructed and how society should be organized. Using a compelling, entertaining mix of hypotheticals, news stories, episodes from history, pop-culture tidbits, literary examples, legal cases and teachings from the great philosophers—principally, Aristotle, Kant, Bentham, Mill and Rawls—Sandel takes on a variety of controversial issues—abortion, same-sex marriage, affirmative action—and forces us to confront our own assumptions, biases and lazy thought. The author has a talent for making the difficult—Kant’s “categorical imperative” or Rawls’s “difference principle”—readily comprehensible, and his relentless, though never oppressive, reason shines throughout the narrative.

Sparkling commentary from the professor we all wish we had.


10 BOOKS ABOUT THE AMERICAN LEGAL SYSTEM:

WHO GETS WHAT
by Kenneth R. Feinberg
Newsletter sign-up