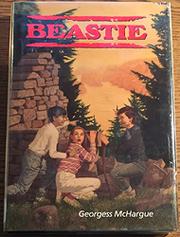 What if some nice American kids, sturdy representatives of their generation's environmental concerns, were the first to spot a monster that their parents were stalking with full scientific gear? This time out, McHargue, whose interest in mythological creatures and the like dates back at least to The Beasts of Never (1968), spins an engaging tale with a satisfying outcome to just that situation. Soon after arriving at a Scottish loch (not Loch Ness, but very like it) where a major search is being mounted, Mary has made friends with Theo, whose scientist parents are photographers for the expedition, and Scott, whose preening dad is director. Skeptics all, the kids rig a hoax: a string of hot-water bottles that the sophisticated scanners read as a segmented underwater creature. Soon after, they are astonished to see Tayzie, the local cook's little sister, sporting in the loch with a genuine dinosaur-like creature. Suddenly, it's not a game: when they realize that the adults are rigging a cruel trap, they manage to save ``Beastie'' by luring her out of her secluded bay before the trap is set. There are some weak links here (a character whose appearance bodes more menace than ever materializes; the expedition's vague focus), and the wait for Beastie's first appearance two thirds through seems long. Still, the kids are likable and believable, the lively narrative holds attention, and the monster-saving scenario is a winner. (Fiction. 8-12)