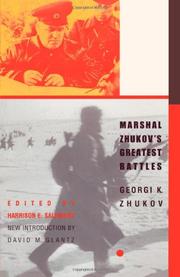 The greatest Strategist of World War II, Harrison Salisbury argues in his introduction here, was Marshal Georgei Zhukov, ""master of disaster,"" who organized and directed up to twenty armies at once in the back-to-the-wall struggles of the Soviet theater. Zhukov, also the outstanding military man in postwar Russian politics, now tells of his four greatest battles: Moscow, the first major defeat inflicted on the invaders; Stalingrad, epic blow to Nazi strength; Kursk-Orel, the turning point, an immensely important engagement almost unknown in the West; Berlin, political prize won by Stalin's favorites, who raced each other to take the city first. The narrative, focusing on planning and execution, clearly establishes Zhukov's tactical genius. Russian casualties are never mentioned; also missing is a strong sense of the Marshal's personal style--he was regarded as one of the most ruthless of the war leaders. Human interest, instead, centers on the politics of command: on Stalin, to whose whims and prejudices the generals had to cater; and on Zhukov's biting critique of lesser military figures. For years after his last fall from grace an ""unperson,"" his name deleted from rivals' war accounts, Zhukov now returns the compliment in subtler fashion. His precise targets are identified in Salisbury's invaluable notes. Curiously, Salisbury fails to mention that the smoother, if more propagandistic, works of one of Zhukov's main opponents, Marshal Chuikov, are available here in English for comparison. Salisbury's bias is also apparent in the exaggerated inferences he draws from Zhukov's occasional grumblings against Stalin. Historians and war buffs will agree that these reminiscences make a substantial contribution to the military-political history of World War II; the general reader will find in them a clue to the line taken in Zhukov's complete memoirs, just published in the USSR and scheduled for translation, of which this book forms several chapters.