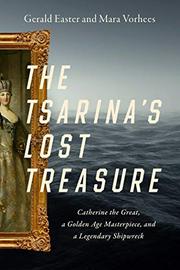 Catherine the Great, a Golden Age Masterpiece, and a Legendary Shipwreck

The story of a 1771 shipwreck off the coast of Finland that contained Dutch masterpieces bound for Catherine the Great.

Gerrit Dou (1613-1675) was one of the most prominent artists of the Dutch golden age. An apprentice to Rembrandt, he eventually surpassed his teacher in fame and wealth. Over the centuries, however, Dou’s reputation has shifted repeatedly with the tides of fashion in the arts. His story makes up one strand of this mostly engaging new book by Easter and Vorhees. Another is the tale of Catherine the Great, who, during her reign, became a prominent art collector, gathering scores of European masterpieces and carting them to St. Petersburg. The authors describe how Catherine acquired Dou’s masterpiece triptych, The Nursery, and engaged a Dutch merchant ship to transport the painting, and many others, to the east. That ship, the Vrouw Maria, sank in the Baltic Sea, carrying Catherine’s paintings down with it. The authors trace the numerous attempts, over the centuries, to find the shipwreck (and the paintings trapped inside) and bring it to the surface. In 1999, a wreck hunter discovered the ship perfectly preserved, but Russian and Finnish officials have disputed the ownership of its contents. While the intriguing narrative contains a fine collection of eccentric characters, the style doesn’t always live up to the appealing subject matter. The authors have an unfortunate penchant for alliteration—e.g., “the apprehensive adolescent,” “stoic soldier,” and “preaching patriarch”—and they occasionally overreach by including too many minor characters, from 17th-century aristocrats to 20th-century Finnish divers. Still, they are largely successful in their synthesis of a massive amount of complicated material, creating an often suspenseful tale that should please the many “treasure hunters, marine archeologists, art historians, financial investors, and adventure-story lovers [who] continue to contemplate the fate of the [ship’s] precious cargo.”

Though weighed down by excessive detail and infelicitous prose, it’s an entertaining yarn whose ending is yet to be written.