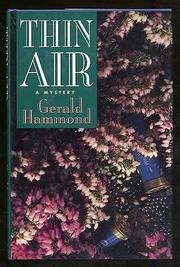 It's no surprise that somebody has shot cantankerous Old Murdo Heminson, Sir Peter Hay's tenant farmer at Easter Coullie Farm. After all, he'd never gotten along with his older son Brett; he'd quarreled with Brett's brother, Young Murdo, over his romance with Sheila McKee, the neighboring farmer's daughter; he'd tricked local jack-of-all-trades Duggie Bracken with a postdated check for services rendered; and—in this slim tale's opening and most telling episode—he'd just made an enemy of new veterinary assistant Jean Mather by the spectacularly unhelpful way he'd retrieved her runaway car from a silage pit. No, the mystery isn't why somebody would murder Old Murdo, but how, since Inspector Ian Fellowes can't explain how a mere air-gun pellet penetrated the thick part of his skull with enough force to kill him. It's obviously a case for Fellowes's father-in-law, gunsmith Keith Calder, and until he gets back from a trip with his wife and daughter to wrap up the case without even pausing for breath, his friends have little to do but suggest possible weapons that could have made the wound (a .22 rifle? a nail gun?) and recover the body of Young Murdo from a poisoned hole in the ground. Pleasantly matter-of-fact about violent death, but still no more than a barely extended anecdote—as Hammond (Curse of the Cockers, p. 176, etc.) acknowledges in a candid endnote. Of interest mainly, it would seem, to other alert gunsmiths.