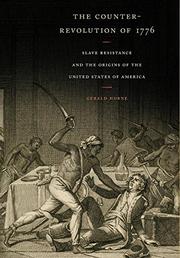 Slave Resistance and the Origins of the United States of America

Horne (History and African-American Studies/Univ. of Houston; Negro Comrades of the Crown: African Americans and the British Empire Fight the U.S. Before Emancipation, 2012, etc.) returns with insights about the American Revolution that fracture even more some comforting myths about the Founding Fathers.

The author does not tiptoe through history’s grassy fields; he swings a scythe. He helps readers see that slavery was pervasive in the American colonies—and not just in the South (Rhode Island was a major player in shipping)—and reminds us of the fierce New World competition among England, France and Spain. But beneath these basics is an aquifer of information about slave revolts and the consequent fears of slaveholders. Horne takes us around the colonies, showing that the vast numbers of Africans were setting off alarms all over. He argues that Georgia, for example, was created as a white buffer state between Spanish Florida and the Carolinas, but the white Georgians were soon unhappy: They didn’t want to do the unpleasant manual labor, and their competitors—the slaveholders—had an economic advantage. As a result, slaves were soon flowing into Georgia, and Georgians soon began experiencing the same anxieties as the rest of the white colonists. As England began to move more toward ending its slave trade (not for humanitarian reasons), uneasy Americans (rich white ones) began to meet and bray about freedom and liberty, causing many, of course, to note the hypocrisy. Horne also examines the ever harsher laws passed by timorous whites against slaves who disobeyed or revolted—moves which, as the author shows, only intensified slave anger and resistance. As many as 20,000 slaves joined the Redcoats in the Revolution, and the author traces some of our lingering racism back to 1776.

Clear and sometimes-passionate prose shows us the persistent nastiness underlying our founding narrative.