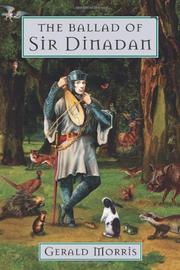 THE BALLAD OF SIR DINADAN

Fans of The Squire’s Tale (1998) and its sequels will welcome this new installment in the humorous take on the King Arthur legends. With main characters varying from book to book, this one introduces Dinadan, the son of a noted baron and younger brother of Tristram, a knight who has left home to seek fame and fortune. Dinadan is a gentle soul who loves music and pursues his dream to be a minstrel despite society’s rule that noblemen’s sons don’t become troubadours. Dinadan embarks on a series of adventures in which he learns about himself, finding courage he didn’t know he had. He teams up with knights from King Arthur’s court, and later, with a Moorish knight, learns the truth about Tristram’s real nature, and dabbles in romance. Morris deftly avoids a clichéd ending with a final, unexpected twist. Because readers are less familiar with the tales of Tristram and Iseult, and Culloch, the humor in this sequel may be less accessible to most than the earlier installments. While not the strongest or funniest in the series, this will nevertheless satisfy Arthurian buffs as well as those who like their history and fantasy mixed with humor. (Fiction. 10-14)