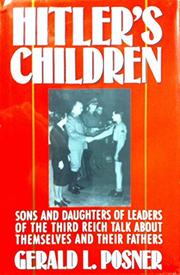 Posner (Mengele, 1986; The Warlord's Crime, 1988) spent a long time searching for the offspring of some of Hitler's henchmen. Despite meeting angry rebuffs, he did find some who would reveal what it was like to grow up in a Nazi family; here, skillfully edited and reported, are their stories. Almost every chapter dwells on one of the Nazi elite as seen from the vantage point of a child. One is startled to read a description of a mass-murdering Nazi leader as a ``loving father.'' Wolfe Hess defends his father Rudolf as a ``man of peace'' who was wrongfully imprisoned and murdered by his Allied guards; Hans Frank, the ``Butcher of Poland,'' is condemned by one son but admired by another; the gross egotist Goering is still beloved by his daughter Edda; and children of Mengele—the ``Angel of Death'' of Auschwitz—and of Donitz (Hitler's successor) and others appear unrepentant while remembering the glory days of the Third Reich as the ``good time.'' The only uplifting narrative is the portrait of the brave and highly gifted aristocrat Count Claus von Stauffenberg, a cultured soldier who led the failed attempt on Hitler's life and who was executed as a traitor to Nazi Germany. He is revered in his children's memory as a heroic and humane father. Though adding little to the historical record, Posner's absorbing human-interest sketches speak clearly of the deep emotional reactions of those who must bear their terrible burdens of inherited guilt.