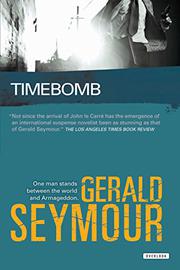 But when intel regarding the sale of a portable nuke makes Goldmann of interest to MI5, the stakes rise. Carrick foils an apparent assassination attempt and finds himself finagled into Goldmann’s trust just as they hook up with the broker, mafia heavy Reuven Weissberg whose lineage, nihilism and innate distrustfulness descend from a survivor of the Sobibor extermination camp. As a pawn in the hands of the brusque, unorthodox Christopher Lawson, 38 years an officer with the Secret Intelligence Service, Carrick walks the high wire sans safety net, enduring ruthless tests by mafia thugs. Meanwhile two disgruntled former Soviet soldiers excavate the weapon from its hiding place in a vegetable patch and set off in a decrepit car on a bizarre, often Quixotic odyssey, facing border crossings and inspections with the weapon hidden loosely under a tarp. The buyer, an Islamic militant operative known as “The Crow,” has lined up an expert to verify the device’s authenticity, a nuclear scientist let go from his position for family connection to the tribal areas in Pakistan. Themes of disenfranchisement breeding treachery and buried evils inevitably resurfacing permeate this latest, balletic thriller from Seymour (Walking Dead, 2008, etc.), whose sense of historical underpinnings, earned from years of covering terrorism as a journalist, elevate this tale to the heights of the genre, offering sprung steel suspense and sobering depictions of a world tilting on its nuclear fulcrum from Cold War deadlock to post 9-11 volatility. As the threat of nuclear terrorism looms, Carrick’s psychological state threatens collapse. Weissberg leads him to the site of one holocaust—will it become birthplace of another?

Intricately crafted and clocklike in its controlled release of psychological and geopolitical tension.