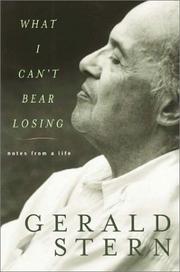 WHAT I CAN’T BEAR LOSING

Notes from a Life

National Book Award–winning poet Stern (Last Blue, 2000, etc.) brings the same renowned voice to prose, from a life that began in 1925 in what he recalls as the “Calvinist” Pittsburgh of his immigrant Russian parents.

“They were Sunday Jews,” he recalls, “nonobservant, indifferent to the mind, scoffers at culture. I was the first person to bring a book into the house.” And he read his way to the life of a poet—but hardly overnight. Using the memory he claims “my friends hated me for,” Stern plumbs the nonproductive decades of his youthful wanderings from Pittsburgh to Paris and through Europe to groves of academe for, no doubt, expiation. And while he always seems to remember whether he was reading Dickens or Milton when he was sleeping with a particular (often older) woman, he doesn’t always remember her name. His flowing style forms seemingly random narratives, but there’s also a cycle here: affirmation followed, inexorably, by self-deprecation and then the fears and doubts that lie in wait—for anyone—around the corner. Fortunately, the puckish Stern constantly spies on the impassioned Stern and informs on him. Considering, for example, a passage in Ezekiel, he notes: “It is a radical vision, and a little shocking, as well as being the kind of hyperbole that poets use to upset computer scientists and tree surgeons.” Holders of poetic license, of course, must always find the mystery in it. When there’s a lot of whiskey but no brute force, is it rape? Was the teenage Stern a feckless bystander or an accomplice? Were the nations of Europe in the postwar ’40s feckless bystanders or accomplices to the noble sufferings of sublime cellist Pablo Casals (a Stern hero) under Spain’s Franco?

Yet, with ultimate tenderness, comes the taunting suggestion that we might have been better off in that jittery world poised on the brink of a half-century’s Cold War.