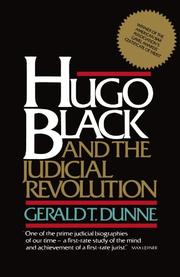 HUGO BLACK AND THE JUDICIAL REVOLUTION

This sympathetic biography by the author of Justice Joseph Story (1971) shares its subject's unabashed spirit and size; it is genial, energetic, devoid of literary elegance, and, properly, full of paradox. The book begins with Black's 1937 confirmation as Supreme Court Justice, when he fudged, then admitted, charges that he had belonged to the Ku Klux Klan. His membership, it later emerges, may have been intended to restrain Klan violence from within as well as to secure Alabama political clout. Black himself, though born in farm country, had scant populist background; a labor lawyer in industrial Birmingham, he became a gadfly New Deal Senator and friend of patrician Fabians like Harold Laski. And this Fabian streak (Dunne calls it a use of procedural change to effect social transformation from above) came to permeate the Court as a whole, some thought. Initially, however, Black set about challenging federal judicial power on behalf of the New Deal and its legislative supporters; and at the end, he returned to a fight against overextension of court initiatives. Black's deepest consistency, Dunne finds, was his ""literalism,"" his ""faith in constitutional absolutes,"" especially the First Amendment (""I read Mo law abridging' to mean no law abridging"") and the rights of accused criminals. This libertarianism, though, did not exclude approval of the WW II detention of Japanese-Americans, nor did it entail a states'-rights commitment--Dunne describes Black's ongoing polemics with Felix Frankfurter as centered around the latter's ""federalism,"" while Black upheld sweeping commerce-clause powers and was an early one-man-one-vote partisan. After Frankfurter--and Black's emotional nemesis, Robert Jackson--have faded, the book turns to the Warren Court as a whole, and Black fades somewhat too. At times Dunne treats the paradoxes lightly: Black's anger at Southern sit-ins is attributed to a ""small-business point of view"" by the man who defended the sit-down strikers of the '30s, for example. And there is one streak missing from Black's Supreme Court portrait--the political canniness that he was reputed to have retained on the bench. Yet this is a generous amplification of the man ""in context"" which makes superficial inconsistencies into challenging puzzles.