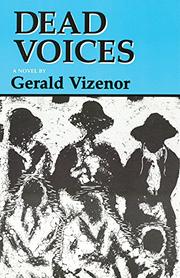 The creatures of Native American myth and the urban realities of Oakland, California, come together in Vizenor's (The Heirs of Columbus, 1991, etc.) latest excursion, making full use of his penchant for transforming the commonplace into the mysterious and comic. With chapters and contents conforming to seven cards in the wanaki (which means ""to live somewhere in peace"") game of chance, a variety of animal experiences interweave amusingly with the human condition. The worlds of bears, fleas, squirrels, mantis, crows, beavers, and tricksters--the wild card in the game--appear in turn, all triggered by an encounter with an old tribal woman, Bagese Bear, in an aviary as she conversed with a cage of crows. In her apartment cluttered with mirrors, stones, and other elements of the game, she tells her stories to the narrator (""Laundry"")--tales of the living voices of the tree line that are meant to counteract the dead voices of the city. Thus a society of fleas organize themselves to wage total war against an exterminator, a war they win through an alliance with neighborhood birds; the male mantis Mikado, seasoned warrior, escapes a trap set by a coldhearted blond scientist more predatory than her female mantis counterparts; in the trickster segment, a young tribal woman builds a thriving company based on Touch the Earth birch cups, which decompose quickly and are made to be thrown away as trash, prompting a congressional inquiry. Bagese disappeared without a trace from her Oakland apartment one day, but can still be glimpsed in the form of a bear in one of her mirrors, now belonging to the narrator, who celebrates her wisdom by publishing her stories even though she asked him not to. Lively and evocative tales--loosely linked as a single narrative yet closely tied to the game's ritual actions--that reveal much about the survival of Native American traditions in the cities and the perils involved in listening to dead voices. A witty but serious warning.