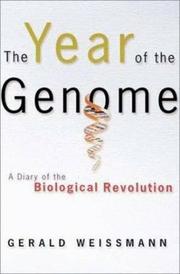 THE YEAR OF THE GENOME

A Diary of the Biological Revolution

Weissmann’s “diary” runs in reverse order, beginning on October 2, 2001, and working backwards to April 3, 2000. The dating is as arbitrary as the title; essays have more to do with whatever news struck Weissmann’s fancy and launched his stream of medical consciousness. For example, the entry dated June 26, 2000—the day that Francis Collins and Craig Venter appeared with President Clinton to announce that the rival teams had all but completed mapping the human genome—takes the White House event as a jumping-off point for a discussion of laying the transatlantic cable in the19th century and the place of private enterprise in science and industry. Given the author’s respectable knowledge of the arts and sciences, this approach is often rather enlightening. Weissmann’s take on good friend Lewis Thomas’s life (January 17, 2001) emphasizes Thomas’s liberal stance against the rampant anti-Semitism that characterized most medical schools a generation ago. The essay for October 3, 2000 (during the week the FDA approved controversial “abortion pill” RU 486), encapsulates the history of research on the effects of steroid hormones on cell membranes and of prostaglandins on uterine muscle. April 3, 2000, cautions against mixing prescription drugs and herbal remedies (about which Weissmann is generally negative) but concludes with a marvelous history of aspirin. July 4, 2000, a paean to the late Patrick O’Brian, may intrigue fans with the suggestion that O’Brian heroes Aubrey and Maturin are modeled after Fitzroy and Darwin. Elsewhere, Weissmann reveals an impatience with the way things are, a sense that we haven’t come all that far, and even the suggestion that it might be best to go back, for example by reintroducing DDT as a means of preventing malaria.

There’s wisdom here to be sure, but it’s mingled with plenty of self-indulgence.