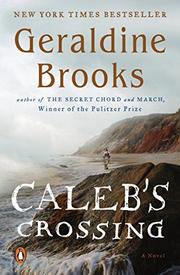 The NBA-winning Australian-born, now New England author (People of the Book, 2008, etc.) moves ever deeper into the American past.

Her fourth novel’s announced subject is the eponymous Caleb Cheeshahteaumauk, a member of the Wampanoag Indian tribe that inhabits Massachusetts’s Great Harbor (a part of Martha’s Vineyard), and the first Native American who will graduate from Harvard College (in 1665). Even as a boy, Caleb is a paragon of sharp intelligence, proud bearing and manly charm, as we learn from the somewhat breathless testimony of Bethia Mayfield, who grows up in Great Harbor where her father, a compassionate and unprejudiced preacher, oversees friendly relations between white settlers and the placid Wampanoag. The story Bethia unfolds is a compelling one, focused primarily on her own experiences as an indentured servant to a schoolmaster who prepares promising students for Harvard; a tense relationship with her priggish, inflexible elder brother Makepeace; and her emotional bond of friendship with the occasionally distant and suspicious Caleb, who, in this novel’s most serious misstep, isn’t really the subject of his own story. Fascinating period details and a steadily expanding plot, which eventually encompasses King Philip’s War, inevitable tensions between Puritan whites and upwardly mobile “salvages,” as well as the compromises unavoidably ahead for Bethia, help to modulate a narrative voice that sometimes teeters too uncomfortably close to romantic cliché. Both Bethia, whose womanhood precludes her right to seek formal education, and the stoical Caleb are very nearly too good to be true. However, Brooks’ knowledgeable command of the energies and conflicts of the period, and particularly her descriptions of the reverence for learning that animates the little world of Harvard and attracts her characters’ keenest longings, carries a persuasive and quite moving emotional charge.

While no masterpiece, this work nevertheless contributes in good measure to the current and very welcome revitalization of the historical novel.