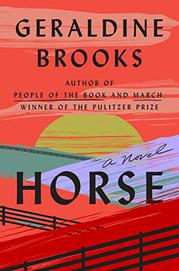 A long-lost painting sets in motion a plot intertwining the odyssey of a famed 19th-century thoroughbred and his trainer with the 21st-century rediscovery of the horse’s portrait.

In 2019, Nigerian American Georgetown graduate student Theo plucks a dingy canvas from a neighbor’s trash and gets an assignment from Smithsonian magazine to write about it. That puts him in touch with Jess, the Smithsonian’s “expert in skulls and bones,” who happens to be examining the same horse's skeleton, which is in the museum's collection. (Theo and Jess first meet when she sees him unlocking an expensive bike identical to hers and implies he’s trying to steal it—before he points hers out further down the same rack.) The horse is Lexington, “the greatest racing stallion in American turf history,” nurtured and trained from birth by Jarret, an enslaved man who negotiates with this extraordinary horse the treacherous political and racial landscape of Kentucky before and during the Civil War. Brooks, a White writer, risks criticism for appropriation by telling portions of these alternating storylines from Jarret’s and Theo’s points of view in addition to those of Jess and several other White characters. She demonstrates imaginative empathy with both men and provides some sardonic correctives to White cluelessness, as when Theo takes Jess’ clumsy apology—“I was traumatized by my appalling behavior”—and thinks, “Typical….He’d been accused, yet she was traumatized.” Jarret is similarly but much more covertly irked by well-meaning White people patronizing him; Brooks skillfully uses their paired stories to demonstrate how the poison of racism lingers. Contemporary parallels are unmistakable when a Union officer angrily describes his Confederate prisoners as “lost to a narrative untethered to anything he recognized as true.…Their fabulous notions of what evils the Federal government intended for them should their cause fail…was ingrained so deep, beyond the reach of reasonable dialogue or evidence.” The 21st-century chapters’ shocking denouement drives home Brooks’ point that too much remains the same for Black people in America, a grim conclusion only slightly mitigated by a happier ending for Jarret.

Strong storytelling in service of a stinging moral message.