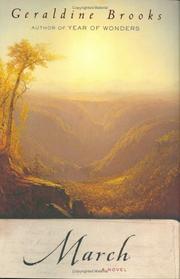 Brooks combines her penchant for historical fiction (Year of Wonders, 2001, etc.) with the literary-reinvention genre as she imagines the Civil War from the viewpoint of Little Women’s Mr. March (a stand-in for Bronson Alcott).

In 1861, John March, a Union chaplain, writes to his family from Virginia, where he finds himself at an estate he remembers from his much earlier life. He’d come there as a young peddler and become a guest of the master, Mr. Clement, whom he initially admired for his culture and love of books. Then Clement discovered that March, with help from the light-skinned, lovely, and surprisingly educated house slave Grace, was teaching a slave child to read. The seeds of abolitionism were planted as March watched his would-be mentor beat Grace with cold mercilessness. When March’s unit makes camp in the now ruined estate, he finds Grace still there, nursing Clement, who is revealed to be, gasp, her father. Although drawn to Grace, March is true to his wife Marmee, and the story flashes back to their life together in Concord. Friends of Emerson and Thoreau, the pair became active in the Underground Railroad and raised their four daughters in wealth until March lost all his money in a scheme of John Brown’s. Now in the war-torn South, March finds himself embroiled in another scheme doomed to financial failure when his superiors order him to minister to the “contraband”: freed slaves working as employees for a northerner who has leased a liberated cotton plantation. The morally gray complications of this endeavor are the novel’s greatest strength. After many setbacks, the crop comes in, but the new plantation-owner is killed by marauders and his “employees” taken back into slavery. March, deathly ill, ends up in a Washington, DC, hospital, where Marmee visits and meets Grace, now a nurse. Readers of Little Women know the ending.

The battle scenes are riveting, the human drama flat.