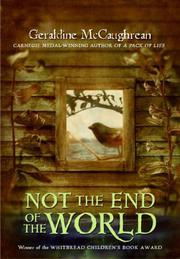 NOT THE END OF THE WORLD

A masterpiece from a gifted storyteller presents the tale of Noah and the Great Flood as anything but a joyride. Seen through the eyes of Noah’s youngest daughter, Timna, with occasional insertions by other members of the family, and even several animal passengers, the Ark is a filthy, festering, all too frail refuge on a strange and scary trip. With her gentle little brother Japheth and Zillah, a bitter abductee to whom he’s been forcibly married, Timna escapes her misfit family into the Ark’s dark, stinking holds whenever possible. There, she helps care not only for the suffering animals, but also for two children, Kittim and his baby sister, who have been secretly rescued from the floodwaters. McCaughrean looks between the lines of the Bible’s sketchy version of events, to the soul-searing effect, for instance, of hearing but having to ignore desperate pleas from outside as the floodwaters rise. She also tucks in ideas from the Odyssey and other ancient tales, plus poignant references to creatures like finucas and quexolans that no longer exist because they died on the voyage. She also, mercifully, suggests that God may have allowed more than just Noah’s family to see the rainbow at the end. Younger than Anne Provoost’s In the Shadow of the Ark (2004) and unlike Richard Monte’s The Flood Tales (2000), this is a breathlessly suspenseful tale as well as a brilliant exploration of doubt, certainty and spirit. It will sweep readers away. (Fiction. 12+)