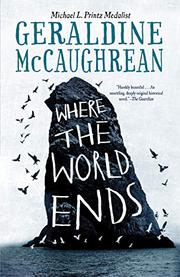 WHERE THE WORLD ENDS

In this Carnegie-winning novel, McCaughrean (The Middle of Nowhere, 2013, etc.) turns a small piece of history into an epic, nearly mythic, tale.

St. Kilda’s archipelago, far off the northwest corner of Scotland, is the most remote set of islands in Great Britain. In 1727, a boat set off from the sole occupied island, Hirta, dropping a small group of men and boys at Warrior Stac, a giant rock, for a fowling expedition. Told from the point of view of Quilliam, one of the older boys, (precise ages are never given; the boys seem to range in age from around 10 to about 16), the trip begins as a grand adventure: scaling cliffs via fingertip holds, making candles out of dead storm petrels, and cutting the stomachs out of gannets to use as bottles for oil. But then, inexplicably, the village boat does not return for them. As the weeks stretch to months and the birds begin to leave the rock, the party fears the end of the world. Cane, one of the men, sets himself up as a divine authority, praying for repentance, while Quill attempts to soothe the younger boys through story—and himself through memories of a young woman he loves. McCaughrean takes the bones of a real event, wraps it in immersive, imaginative detail and thoroughly real emotion, and creates an unforgettable tale of human survival.