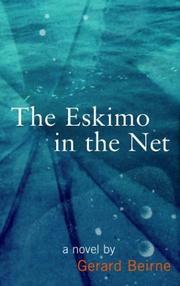 THE ESKIMO IN THE NET

Unsubstantial first novel about an Irish fisherman whose life is thrown into a psychic turmoil when he finds a dead Eskimo trapped in one of his nets.

Jim Gallagher is a dark, brooding Irishmen who seems to carry his own gray cloud with him wherever he goes. Born and raised in a coastal town in Donegal, Jim has a kind of wanderlust that won’t let him sit still for long. Not long ago, he spent several years in Alaska working in an oil refinery, but now he’s back in his hometown, working a fishing boat with his childhood friend Knucky. One day on the boat, they are horrified to find a human corpse tangled up in one of their nets. Knucky figures it’s the remains of someone buried at sea, but Jim recognizes the features as Esquimo. They bring the body into port and alert the harbor master, who hands the body over to the local police and washes his hands of the business. Perhaps Jim should have done the same. Instead, he’s haunted by the incident, and turns the discovery over and over in his head. He also talks about it to Frances, a local bartender who is Knucky’s on-again-off-again girlfriend, and Frances gets Jim to take her to see the body (which she proceeds to kiss on the lips). Jim and Knucky drink a lot and argue about whether they should have bothered hauling the body in. Eventually, Jim gets so drunk that he wakes up in bed with a woman he’s never met before. She says goodbye to him. They never meet again.

Begins well and ends badly: Beirne, an Irish poet and storywriter living in Canada, grabs our attention right away and proceeds to wander aimlessly through the rest of the tale.