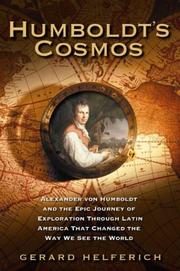 Longtime book-publishing exec Helferich debuts with the chronicle of a journey so arduous it makes the Lewis and Clark expedition seem like a mere excursion.

Emerson once compared explorer and scientist Alexander von Humboldt to Julius Caesar, and certainly his Central and South American trek has all the drama of a power struggle in ancient Rome. It took Humboldt and his single companion, Frenchman Aimé Bonpland, from 1799 to 1804 to traverse 5,000 miles of some of the most forbidding, dangerous, and bleakest terrain on Earth. Add the unprecedented range and depth of cross-disciplinary scientific measurements, researches, experiments, and data collections (including plant and animal specimens) by a man nominated as the consummate intellectual by science pundit Stephen Jay Gould, and the epic stands as unique. At the very least, the unheralded mine inspector (trained in his native Prussia) was the most formidable dilettante who ever lived, chucking a career at age 29 to go off on a self-financed trip to satisfy his curiosity about both terra incognita and natural phenomena. There are more places named after Humboldt, Helferich asserts, than anyone else, from a Humboldt Bay in California to one in New Guinea. His exploits simply inspired accolades; even though he did not actually discover the Humboldt Current off South America, he was first to take its temperature and clock its flow. The author breaks little ground in following his subject, primarily through Humboldt’s own vast body of published works. Forced to address the unavoidable question raised by a life spent with close male companions, some of whom inspired what can only be called love letters, Helferich hews to the claim by “most historians” that these relationships did not involve sex. Also noted: the conflict between Humboldt’s intense personal aversion to slavery and his seeking of patronage from Spanish colonials, its most malignant practitioners.