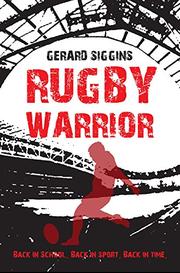 Siggins follows Rugby Spirit (2012) with a companion novel about 13-year-old Eoin Madden, two ghosts, teammate rivalry and the love of the game.

Eoin returns to Castlerock College, his boarding school in Dublin, eager to continue his rugby career. The previous year, he had helped his team win the shiny silver cup now resting in the trophy case on campus. Eoin has a spectral friend, a boy named Brian who had been fatally injured in a match long ago and has helped Eoin learn the game. Eoin finds himself captain of the team, a difficult honor given its challenges, which include bullies, players competing for the same position and learning of the tough home life of one of his new friends. When Eoin decides to enter the Young Historian competition with a project on former rugby great Dave Gallaher, the ghost of Gallaher becomes friends with Eoin, too. “Why on earth had he suddenly become a magnet for dead rugby players?” But the ghosts are friendly and helpful, and ironically, the dead rugby players add life to a rather plainly told sports tale. Though descriptions of rugby and Irish names such as Caoimhe might throw young American readers, kids will recognize familiar sports themes and situations.

A light and enjoyable story to introduce young American readers to the game.