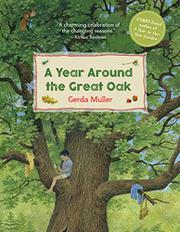 A YEAR AROUND THE GREAT OAK

During each season, city-dwelling siblings Benjamin and Anna visit their cousin Robin and his favorite tree—a 300-year-old oak in a European forest.

“Uncle John was a forester and their house was right on the edge of the forest.” This is typical of the blunt sentences that tell a gentle tale of children exploring the natural world whenever they are together. The illustrations—of gouache, colored pencil, and graphite—have the nostalgic appeal of mid-20th-century Little Golden Books, with people, plants, and animals rendered in a way that imbues them all with sweetness. A semblance of plot develops when Benjamin, despite misgivings, steals away at night for a tree visitation and must stay in its branches to avoid wild boars. The final story scene is a frameworthy double-page spread of children celebrating the oak in the full beauty of summer. The book is an expanded version of a title originally published in Germany in 1991. The sexism present in the text has not worn well. Aunt Beth is mentioned as Uncle John’s spouse but never appears—not even when the others spend a magical spring evening observing badgers and other forest creatures. Anna waters a plant and picks flowers, but she does not join Benjamin and Uncle John to watch a group of all-male foresters at work, nor to ski through the forest with Robin. The primary characters present white. Following the story is the new material: 12 pages of further information about woodlands, in lovingly illustrated detail.