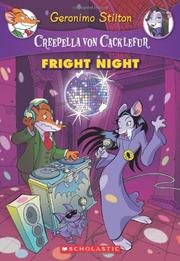 Geronimo Stilton and Creepella von Cacklefur team up to solve a mystery at a scary-poetry contest.

During one of Geronimo’s visits to Mysterious Valley, he is drafted as one of the judges for the Fright Night poetry contest. One of the finalists is Creepella’s father, Boris von Cacklefur. This is poet Boris’ first time competing in a poetry contest since Chester Cheater stole Boris’ entry for a fourth-grade contest. In fact, Boris would not be competing at all had his family not entered him without his knowledge. The contest’s first rounds weed out competitors: There’s an impromptu Rotten Rap, spooky Mind-Bending Riddles and a one-word prompt for a one-minute–poem-composition event called Terror Time. The wordplay and rhymes may not be high art, but they will entertain their target audience. After the three rounds, Boris progresses to the final round against six-time winner, the Fright Night Idol, Brad Balladeer. The interchangeable Rattenbaum triplets support Brad. During the intermission before the final round, Geronimo spies Brad and the triplets acting suspiciously right before Boris goes missing. Creepella and Geronimo, convinced it isn’t stage fright, meander after clues to successfully solve the obvious mystery.

While this story isn’t the strongest of Stilton spinoffs, the familiarity of the characters, art and design will appeal to readers.