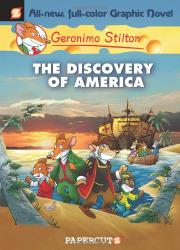 The Discovery of America

The screamingly popular chapter-book series about a timorous mouse who nevertheless gets drawn into adventure after adventure makes its U.S. debut in graphic form. At the beginning of this original tale, Geronimo Stilton learns that the Pirate Cats are in 1492, intent on taking over Columbus’s expedition and snatching the New World’s riches for themselves. Geronimo’s family leaps at the chance for excitement, and off they go. The series adapts well enough to graphic storytelling, although the panels are quite small, with the action squeezed into 56 full-color pages. The characters have a bland, Disneyesque look that nevertheless has undeniable child appeal. One visual glitch is that the Pirate Cats mouse disguises work so well they fool both the good guys and readers—clothing cues help but don’t go all the way. Actual history (presented in occasional interstitial faux-scroll sidebars) and such niceties as time-travel paradoxes take a back seat to action and slapstick, resulting in a good-fun package that’s sure to be as popular as the novels. This publishes simultaneously with #2, The Secret of the Sphinx (ISBN: 978-1-59707-159-8). (Graphic fiction. 6-10)