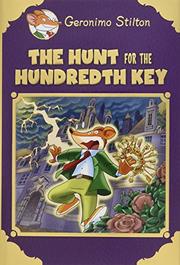 THE HUNT FOR THE HUNDREDTH KEY

From the Geronimo Stilton series

Geronimo Stilton teams up with his sister, Thea, and cousin Trap to solve the mystery of a long-lost castle recently rediscovered in spooky woods.

Right after his grandfather wakes him to demand that Geronimo write a special new book for the students of New Mouse City Elementary School to celebrate their 100th day of school, Thea and Trap have a bigger surprise for Geronimo. Their city’s founder, Grant Gentlemouse, was rumored to have built a secret castle for his mystery bride, and now Thea’s found it, surrounded by a giant hedge of thorny, white roses. She and Trap want to film a television special on it, but they need an assistant to carry equipment and bankroll it, so they call Geronimo. They explore the creepy castle, with Trap pranking scaredy-mouse Geronimo, and discover the mystery bride to be yet another scrivening Stilton, Rose. The rose theme and creepy setting work well in illustrations, especially full-page spreads with art or games, though the series’ trademark design flourish of printing words and phrases in colorful display type within the narrative jars the reading rhythm. Following this book, there’s a bonus story almost as long in which Geronimo wins a cruise trip. There’s a thief on board, and some things seem odd with the beautiful mouse flirting with him. The last feature is a few pages of jokes as delightfully cheesy as ought to be expected from a mouse named Stilton.

The simplistic mysteries and silly jokes are in line with other series outings, “special edition” status notwithstanding.