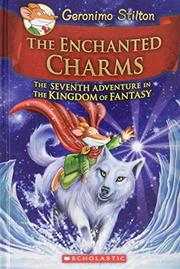 From the Geronimo Stilton and the Kingdom of Fantasy series, volume 7

The latest in the Kingdom of Fantasy series sends Geronimo Stilton on a scavenger hunt for magic items to stop an evil wizard.

Plagued by his own success writing fantasy novels based on his wild dreams, Geronimo Stilton finds himself mobbed in public for autographs and then in private pressured by his friends and family to hurry up and write the next one. But before he can write, he needs to dream the next story, which leads to a comical series of events as his sleep is continually thwarted. Finally, after joining his nephew on a beach visit, he falls asleep and ends up in the Kingdom of Fantasy. While it’s a stand-alone story, there is also a concise rundown of his previous adventures. The fairy queen, Blossom, sends a crab messenger to deliver a mission to Geronimo. He must collect the seven enchanted charms from their guardians before an evil wizard can steal and use them to conquer the land. Although the plot makes good use of the various fantasy settings (resulting in lovely maps), it’s not terribly original or engaging on its own. The crab sidekick, Chatterclaw, is an entertaining mix of cheerful pessimism and questionable judgment, though his forgetful speech pattern wears thin. The art throughout goes beyond bolstering the story, offering a variety of interactive puzzles.

Adequate for its audience.