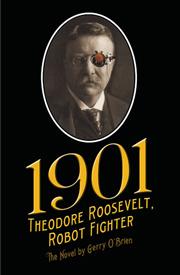 
In this sci-fi–influenced twist on a political thriller, new Vice President Theodore Roosevelt finds himself embroiled in an international conspiracy involving robots.

Imagine a world where Abraham Lincoln survived that fateful night at the theater and his first choice for vice president, Benjamin Butler, helped lead the country into an era of technological advancements beyond even the 21st century’s wildest dreams. Tesla and Edison are partners, an elaborate underwater rail system connects New York and London, Brooklyn is a center of entertainment that far exceeds Manhattan, and robots are attacking world leaders. The only person man enough to take them on is Theodore Roosevelt himself. With the help of British superspy Sidney Reilly and numerous fantastic gadgets such as freeze grenades, Roosevelt assembles a team of the bravest and brightest minds of the era to uncover the truth behind the metal menace. Debut author O’Brien has an enviable imagination and a keen eye for detail; his version of the world circa the turn of the 20th century will enrapture history fans and sci-fi buffs. However, the story would have benefited from fewer plot strands; the further into the book, the more confusing things get. So many historical characters are shoehorned into the plot in so many different ways that eventually this alternative America starts to feel less like a fascinating lens through which to tell a story and more like a gimmick. Fortunately, O’Brien’s wild world manages to remain so engaging that even at the story’s weakest moments, when so many famous names slide across the page so quickly that it becomes difficult to keep track of who is plotting with whom, readers will still want to stick around to figure it all out. It helps that the sprawling cast of characters contains a number of compelling, powerful women who not only participate in society, but control it—a far cry from the Victorian era chronicled in history books.

A steampunk fever dream that will entertain readers even as it overpowers them.