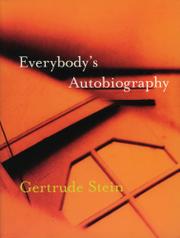 Read this fast, with no stops, no emphases, an unmodulated tone, and it is intelligible. Stop and think and you lose your way. But for the Stein fans, Gertrude Stein is as she is and they like her that way.... This takes up the last two years, following the Alice B. Toklas continuity, everyday happenings, Paris, the South of France, America, written to sustain her own definition of an autobiography, — "Anything is an autobiography but this was a conversation." Again she says, — "Everybody says something, certainly everybody here does." This is true to some extent and she quotes occasionally from Thornton Wilder, Woollcott, Bromfield, Seabrook, Bernard Fay, Carl Van Vechten; but on the whole she monopolizes the book.