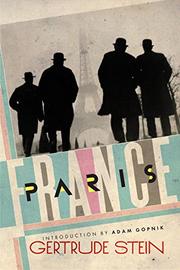 A contrarian expatriate’s impressionistic rendering of her adopted country, just before the ax fell.

Gertrude Stein (1874–1946) said that writers “have to have two countries, the one where they belong and the one in which they live really.” She would know; born in Pennsylvania, she moved to Paris in 1903 and never left. Writing this slim 1940 volume in the looming shadow of the Nazi invasion, Stein comports herself as an American de Tocqueville, seeking to define a country she knew intimately but which never stopped surprising her. France was the locus of “logic and fashion,” a barometer of civilization, and the place where 20th-century art and literature were created (often in her own salon, a second home to Hemingway and Picasso, among others). As Adam Gopnik writes in a useful introduction, the book is “a picture of Paris by an American who thinks as Americans think, and we see America in the picture when she thinks she is showing us France.” Stein wrestles with her subject, saying what it is by saying what it isn’t, offering up observations both astute and sentimental. “Foreigners were not romantic to [the people of France], they were just facts, nothing was sentimental they were just there, and strangely enough it did not make them make the art and literature of the twentieth century but it made them be the inevitable background for it.” It’s an idealized picture, in many ways; the people “cannot really lie,” and “children are never really harshly treated.” Stein didn’t fully grasp the Nazi threat, but she sensed it.

A unique, romantic memoir and a perfect introduction to a unique American voice.