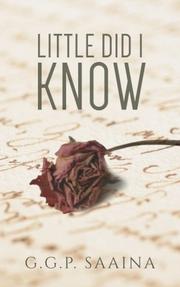 LITTLE DID I KNOW

Helping a spirit to find peace allows a woman to put to rest some of the ghosts in her own life in this debut novel.

Saaina’s fetching protagonist is Jaya, an overworked medical student and researcher in Nashville. Jaya had fled to the United States from her native India to escape her life of privilege and her suffocating family. She’s content with her busy lifestyle, although she develops a yearning for a place of her own. Jaya is drawn to a quaint fixer-upper in the suburbs, which she falls in love with. There is only one problem she hadn’t expected: It’s haunted. One night, she hears noises in a vacant room upstairs, and there, she discovers the diary of Tara, the house’s previous resident. Tara died of cancer, and the diary contains her bucket list, which she had been unable to complete. So Jaya decides to finish the list for Tara to help her spirit move on, with the support of the woman’s old neighbor Leo. At first, the tasks are simple, such as dating a man in uniform and singing karaoke. But she balks when she spots the item “solve a cold case.” In the midst of this crusade, Jaya rushes home to India when her beloved grandmother becomes ill. She also continues working on Tara’s list without realizing that the ghost has been guiding and assisting her all along. The most enjoyable part of Saaina’s novel is watching Jaya evolve from a somewhat self-involved woman to one who goes out of her way to help a perfect (albeit, dead) stranger. While doing so, Jaya gets reconnected to her extended family, which she had tried to leave behind. She even considers the previously unlikely possibility of getting married—to a childhood friend. Saaina, who’s also a native of India, successfully unveils that nation’s upper-caste society, a world unknown to many readers. The author skillfully weaves together seemingly disparate elements—Tara’s list, Jaya’s volunteer cancer research, an Indian cold case, and a charred psychiatric hospital—into a compelling narrative. Jaya’s selfless act results in her ultimately enjoying a fuller life.

A well-developed and enchanting odyssey involving an apparition who ends up aiding the living.