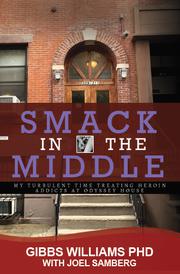 SMACK IN THE MIDDLE

In 1967, Williams, a “novice psychotherapist,” was offered a job at Odyssey House, a well-known heroin addiction research and treatment center on Manhattan’s Lower East Side. The facility had recently been founded by Judianne Densen-Gerber, a highly driven psychiatrist. Six months after starting work, however, Williams says that he began to doubt Densen-Gerber’s methods and decided to keep a journal, whose entries form the basis of this memoir. Williams focuses on what he calls “Dr. Judi’s wild idea” of 24-hour group-therapy sessions, in which staff and residents came together to “dig for deeper truths.” Williams also asserts that Densen-Gerber had “rigid and authoritarian tendencies.” He attempts to understand why he was “mesmerized” by his enigmatic boss by describing his own upbringing and considering how he felt that the Odyssey House founder, who died in 2003, had “assumed the mantle” of his father in his life. The memoir’s co-author and editor, Samberg, conducted interviews with Williams to add “important details not recorded in the journal.” The authors mention that “at least half of the block on which Odyssey House was located could be described as urban squalor,” but readers who might be interested in what everyday life was actually like inside Odyssey House will be disappointed by the book’s lack of visual description. Instead, it often feels akin to an academic paper, with a delivery that will prove unpalatably dry for some: “Although mild punishments were sometimes necessary, they were never dispensed before careful evaluation of their potential for efficacy or futility.” The memoir does allude to specific residents by first name, such as Tyrone, but their stories have the manner of impersonal case studies. Overall, this book will prove useful to those interested in the methodologies adopted by Odyssey House. However, its sterile storytelling approach will deter casual readers.

A sometimes-revealing but blandly written remembrance.