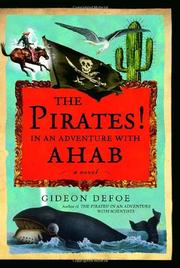 THE PIRATES! IN AN ADVENTURE WITH AHAB

Having recovered from schlepping around the Galápagos in The Pirates! In an Adventure with Scientists (2004), Defoe’s scurvy dogs go in search of a famous whale in this slim, surreal sequel.

When the mast of his ship flattens, Pirate Captain, “the pirate who liked to show off how much he knew about wine,” recognizes that it’s time for a trade-in. Unfortunately, he makes a deal on an expensive boat with a murderer who picks off deadbeats and grinds their bones to dust for use in hourglasses. After a fruitless search for treasure to pay the debt, Pirate Captain makes the mistake of accepting an offer of help from his doppelgänger, Black Bellamy. (“There were several reasons why the Pirate Captain and Black Bellamy didn’t get along, but the main one was that Black Bellamy was the Pirate Captain’s evil nemesis, which obviously put quite a strain on the relationship.”) So the pirates—after a side trip to Vegas, where their pirate-related revue fails to draw crowds—take up a weary Ahab’s offer for a contract on Moby-Dick. Much silliness ensues. Defoe keeps things moving along and has a winning proclivity toward footnotes—where he does some of his best writing—and nonsensical asides. (Pirate Captain has his feet helpfully tattooed “left” and “right,” “a gift from his mother on his fourth birthday.”) The clever tone is somewhere between Monty Python and comic artist-writer Kyle Baker, and there are a few lascivious jokes and one instance of hot whale-on-boat action.

Readers in search of intelligent, whimsical nonsense could do far worse than setting sail with Pirate Captain. Aaarrr.