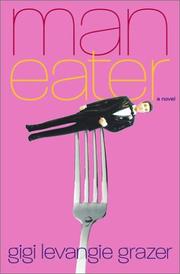 How to leapfrog through the Hollywood scene—using men as lily pads.

It might be wise to beware of books by the wives of producers. But this spouse to Brian Grazer has not only written a real book but done so drawing on years of experience swimming with Hollywood sharks. For her second outing, Grazer (Rescue Me, 2000) introduces Clarissa Alpert, one of the most unapologetically horrendous little monsters to graze any novel’s pages. Clarissa has never held a job beyond that of trying to land the right husband and is a full-fledged member of “the Army of Disinterest,” a specifically LA type that Grazer characterizes by “ingrained laziness, a willingness to bestow blow jobs on men in powerful positions, and a sense of entitlement that only the insipid are privy to.” Clarissa is taking part in her New Year’s tradition, drinking at La Domaine and writing up her Man List, when her waiter friend drops a hint about one Aaron Mason: new in town, scion of a fabulously wealthy southern family and looking to break into the movie business. With Terminator-like precision, Clarissa locks on Aaron, using all the wiles of her daddy-funded, wonderfully licentious 28 (really 31) years, and bags her man. Sometime right after Aaron and Clarissa have had honeymoon sex, and after Clarissa has done what more she could to impregnate herself—involving some used condoms, a turkey baster, and a closed bathroom door—things deviate drastically from Clarissa’s plan. Since this is only about a third of the way through the story, you might imagine that Clarissa is now about to learn some hard lessons about life. Fortunately, that never quite happens, and even as the trusted pillars of her comfortable, haute-couture life fall to the side, one by one, and she has to adjust (somewhat) to the real world, Grazer’s satire never loses sight of the hilariously self-centered, devilish core of her creation’s fierce personality.

Mean-spirited, jaw-droppingly shallow, and hellaciously determined: Clarissa is one for the ages.