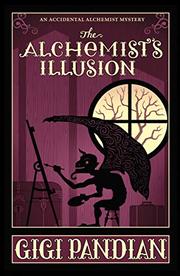 An alchemist is eager to answer a call for help her long-vanished mentor may have concealed within a painting even though pursuing it may force her to disclose her alchemical identity.

An admirer of professions involving skill, passion, and talent, Zoe Faust is mesmerized by a painting at the memorial exhibition of recently deceased Logan Magnus that’s remarkably lifelike in its representation. She’s convinced that this portrait of Nicolas Flamel and his wife, Perenelle, must have been painted by someone who knew the couple firsthand, though they’ve been dead more than 100 years. As an alchemist who’s been alive for centuries, Zoe’s capable of believing the impossible, beginning with the life she shares with her friend and roommate Dorian Robert-Houdin, a living gargoyle. Zoe wishes she could ask Magnus how he knew Nicolas Flamel, who was her alchemical teacher and mentor years before he suddenly disappeared. Although Magnus is a literal dead end, Zoe suspects Flamel’s left a message asking for her assistance. Unable to seek help from her boyfriend, Portland police officer Max Liu, with whom she’s never shared the secret of her true self, she relies instead on the only other alchemist she knows, Tobias Freeman. Tobias is visiting after the recent death of his wife, Rosa, and Max and his colleagues believe there’s something suspicious about his presence in town. Zoe’s more focused on how Tobias can help her track Flamel, though as they come to believe that Magnus was likely murdered by someone who was asking the same question, they feel the danger to themselves. As Max asks questions that make it harder to keep her alchemy practice secret, Zoe has to decide whether now’s the time to reveal who she really is in order to rescue the man who helped her become an alchemist.

The vast storehouse of characters and interwoven subplots will challenge readers new and old to Pandian (The Elusive Elixir, 2017 etc.), who seems more intent on opening doors she’s kept carefully locked until now than on making the new developments pay off.