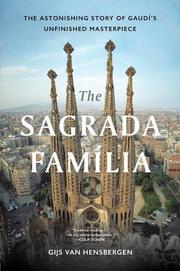 The story behind one of the world’s most unique buildings.

The bold opening sentence of art historian van Hensbergen’s (Guernica: The Biography of a Twentieth-century Icon, 2004, etc.) intoxicating book about one of the world’s most “puzzling” and “quixotic” structures instantly engages: “Gaudí, possibly more than any other architect in history, has been totally misunderstood.” The author writes that Antoni Gaudí (1852-1926), like his buildings, was often seen as “far too eccentric, too bizarre and in Catalonia—the land of Salvador Dalí—almost too obviously surrealist and actually downright strange.” To understand the method behind his architectural madness and his iconic Basilica and Expiatory Church of the Holy Family, it’s necessary to understand Gaudí’s profound Catholic faith. Van Hensbergen takes us on a tour of the building, pointing out its unique and distinctive features, from the roof’s complex vaulting, like an “inverted egg box,” to Gaudí’s invention of the centenary arch, which miraculously holds up the roof without buttressing via inverted chainlike links. When finished, 18 towers will “crowd together and push up in unison like a family in stone.” Gaudí drew on nature—snake skeletons, springtime shoots, and the gnarls and knots on oak trees—revealed through “the omnipresence of God’s guiding hand”—to fashion the ornaments. They “had to speak.” The idea for the basilica came from Joseph Maria Bocabella, a small-time Barcelona religious bookseller. Gaudí took over the commission in 1883 shortly after the first architect was let go. He finished the crypt in 1889, but his “next decision almost defies logic.” He decided to focus on just one facade, meaning that he “would only ever see a fraction of the entire building finished within his own lifetime.” They hope to finish the basilica by 2026, the 100th anniversary of Gaudí’s death. Van Hensbergen’s rich, poetic prose is perfectly suited to describe this unprecedented work of art.

An engrossing, vivid inquiry into a man and his magisterial creation.

ON A GRANDER SCALE
by Lisa Jardine
Children